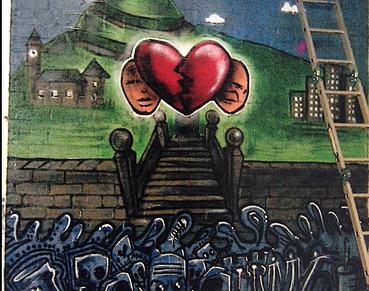 Some people believed in it so much they found a way to record the actual sounds onto a piece of vinyl (or x-ray plastic if you lived in communist Russia where it was definitely seen as A Problem and thus forbidden). When a needle hit the groove in the vinyl, it replayed the exact same vibration as the live music. It transformed the planet because music really could exist outside time and place.  There was now no forward slash between music and culture anymore. It was all one. The only question now was: is it A Problem or A Solution?

The Problem issue was that this weird ability to respond to vibrations, light and energy (a basic human response) had also the capacity to enrich and empower the poor, the oppressed, to heal hurting minds and souls and bring calm and joy, to express grief and rage. The poor owned something at last, something that fed their souls and nourished their communities.

Only rich people can have value. The rich people wanted the music. All of it. For themselves. They didn't want to join in. They just wanted The Stuff that made the Poor People Cool and Happy. They wanted to be just like that - except not poor and from 'there'.

So they invented a music industry whereby the music could slowly but surely be quantified and reappropriated. Vinyl and live music empowered musicians and artists so best get rid of that else there would be who-knows-how-many-more-John Lennons-and-Kurt-Cobains-and-Nina-Simone's-to contend-with-and-all-this-social-change-is-not-good. So change the format: CDs and then the internet! Convert to binary. Devalue the quality, gentrify, increase the quantity of sub-standard stuff disguised as the real thing.  Make folk feel they are getting something for nothing when in fact they are getting nothing for something.

Artists, deprived of real audience energy and vibration, withered and flailed in the toxicity of a binary and monetary system.  Audiences imploded, starved of soul food yet sold the lie they had the world's catalogue of music at their fingertips. The youth disconnected, brains atrophied and aged, mental health deteriorated, souls decayed and nations reverted to violence and destruction in the vacuum left by love and peace. Worship and praise shifted from the Creator to the Algorithm.

It is time to set the record straight. To reclaim real music, real community and real humanity while we still have a chance.

DIY. Let's start talking with music again. We don't need your engines - we'll build our own.