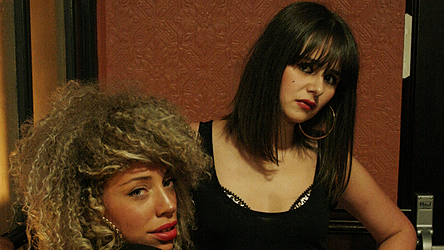 Before 2006, I think if anyone had even mentioned the word Dundee to me, I would have said fruitcake.  If pushed to it: Highland toffee bars, Iron Bru, haggis and whisky – none of which I liked.  I certainly wouldn’t have thought it was synonymous with style and culture. That was before MySpace and before I encountered the Little Wasted Deejays.

MySpace 2006 introduced me to The View, a band from Dundee that completely captured an energy of positivity and fun. After the most miserable, wretched decade of my life, I was so ready for that.  But the thing which really, really set fire to my creative juices was a couple of hairdressers/deejays who were the muse of the band: Charlene and Karlene aka The Wasted Little Deejays. They were seventeen, fearless, blonde, outrageously glamourous and yet down-to-earth. They were actually more hardworking than wasted but I guess that wouldn’t have made such good PR.  In this new world of instant messaging, I started a correspondence with Karlene based on a shared love of the Ronettes, DIY fashion and a rock’n’roll attitude. I gave her a lift from Stoke train station to a gig and that was it.  Those girls introduced me to a world of colour and energy, a new adventure.

Later that year, instead of following through on a trip to Peru at Christmas, I did a 180 at Frankfurt airport and returned to the UK to drive up to Dundee – the furthest north I’d ever been in my life.  It was freezing cold, foggy and dark. As I broke into the daylight, strange horned hairy beasts appeared to stare at me from the sides of the road – no, that’s not an insult to folk coming home from the pub.  It was real live Angus cattle but, to me, prehistoric creatures. And then there were penguins. These were neither real nor live but big and plastic; I’d been driving five hours and was a bit shaken by the Angus cattle when I arrived at the Discovery quay next to my hotel. There were seals in the Tay outside though.  I really felt like I’d arrived at the North Pole.

Within six months, I had completely fallen in love with this romantic city. I use the word ‘romantic’ in its real, literal sense. It was full of mystery, beauty in strange corners, gothic wonder and the most incredible light. For an artist, it beat my favourite cities: New York City, Paris and Florence to the post for inspiration and space for creativity. It had absolutely everything I needed.  I was writing and painting non-stop and, by November, had packed up and moved there permanently, got a job and learned the dialect - although never the pronunciation.

The locals would ask why I had moved to Dundee and when I told them: ‘It’s the most romantic, magical city’ or ‘The light!’, I was dismissed as batty, mad.  ‘Dundee’s shite!’ they’d declare. As a high schoolteacher, I was soon clued-up to the deprivation, despair and poverty that scarred so many but it didn’t change my view. If anything, it deepened it.

Back then, my features were focused on music and art and Clash magazine had an outpost in Dundee. I became a staple reviewer at all the Scottish festivals: T in the Park, the Edinburgh Film Festival, Live at Loch Lomond, to name but a few.  But what kept me going was the energy and banter of the women, their style and absolute commitment to showing out.  In the UK, the onus was on how fast you could do your makeup or get dressed; in Dundee, it was all about quality. All about the effort.  A night out meant several weeks of planning and preparation.  In this outlier of a city, the girls changed their hair colour or style weekly, celebrated tattoos, piercings and made their own outfits.  It wasn’t done to attract the men so much as to announce your arrival. It was a war cry, completely at odds with staid mainland fashion.  They didn’t follow London or chronology in the same way. They picked and chose cultures and times at whim and then dedicated themselves to reinterpreting it.  It was a very weird and freeing place to be.

The one thing they were dedicated to was makeup. There were two camps: the ones who were addicted to sunbeds and tanning spray and the ones who celebrated their porcelain skin.  Either way, makeup, style and attitude were the armour of Dundonian females, their banter a battle anthem. I loved my trips to the hair salon; Dundee hairdressers are utterly dedicated to their precision to detail, their irrepressible positivity.

There were a lot of scientists in the city and it was my friend’s facialist who warned me against fizzy pop as the acidity would break out on my skin.  It was true; when I stopped the Diet Coke, I stopped with the breakouts. It was my hairdresser at McGregor’s who taught me how to celebrate my thick, long dark hair which, until then, had been a permanent problem to me.

I know Dundee has media coverage of being some sort of sink city for drugs and despair – a fact. But it is not the truth.  The truth is that there are many women who, despite such tough and terrifying conditions, forge a fierce path through, are committed to that same incredible light and inspired by its gothic majesty to become something greater.

They are quality. They are class.  They are unique.

Dundee definitely inspired and inspires me still to this day. The women there are like no place else. Brutally competitive but with the warmest, bravest hearts if you get through. This blog is dedicated to their passion and determination to find beauty despite the ugliness. This blog is to celebrate such style, and, I hope, their very long good health. 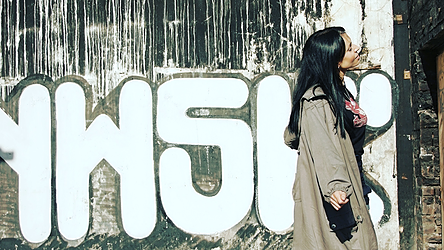