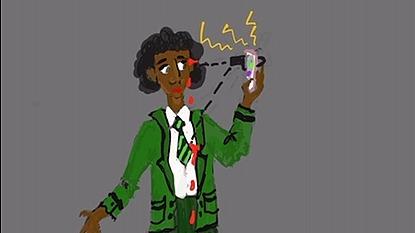 THE MOST IMPORTANT MATTER ON MY MIND THIS YEAR:

Would YOU give a child a weapon of mass destruction?

How social media, greedy tech giants and our glib apathy towards our embedded fascism is destroying our own futures in front of our own eyes.

LANDMINES IN OUR KIDS

Anyone who was ever bullied or abused as a kid knows that those scars stay. Unlike the white line that crosses your knuckle where you collided with a brick wall while on your Chopper bike or the acne pits, you can’t present some wounds with the same pride or resilience.  The real wounds to your inner core fester and grow more entrenched because they are unseen, were undressed and never healed.  The real measure of a bully’s impact is never in the here and now, the forced ‘reconciliation’, the pastoral manager’s plasters over with her checkbox list and paperwork but twenty, thirty years later when anxiety, depression and low self esteem has gone beyond your career, housing and relationship choices and into the very cells of your body: your gut, your heart, blood, lungs, genitals, brain….and offspring.

Having worked in both the education and creative industries for over two decades on both sides of the Atlantic, I am increasingly appalled at how, as a society, we still keep to the broken paradigm that bullies are bad guys and you can beat them. It’s  not just in schools, in business, in relationships but politics too. As humans, we are built to follow leaders and language. If someone says, ‘War on drugs!’, we believe drugs are the bad guys, a drug dealer the villain, a drug addict a criminal. We never ever question where the need for a drug comes from in the first place. That’s too deep a question. Let’s focus on the urgent, the immediate. If someone says, ‘War on terror!’, the bad guy is the terrorist – as ambiguous a term as they come. What inflicts terror the most? Not having a clue who the bad guy is and where and when he is going to come for you.

So Hollywood and populism continues to grow momentum with its simplistic, knee-jerk narratives and archetypal ‘Save The Cat’ Greek outlines. Valid, yes, but there are more cultural narratives out there, older and just as relevant. It doesn’t have to be Caucasian, male and wearing a toga or ptolemy to be erudite, wise and stand the test of centuries.

Living in the twenty second century, we are enthralled with an increasing monopoly of tech giants and narrative-churning corporations spilling out the same monologue. Social media, while asserting otherwise, is in reality doing nothing to offer a broader spectrum of views: on the contrary, it is tattooing the bitesize across every platform to the extent that we are submerged by a mass of one message – that of fear, hate and panic.  Stand out or stand up and, within weeks, you are either drowned out or subtly absorbed into a bigger corporation who fears your voice may contradict or compete with theirs.

So let’s get back to the kids, our beautiful blank slates, our precious future – the same precious future whose best friend and closest family member is an iPad or phone screen. And we wonder why they have breakdowns when it is confiscated?

Do you remember how vulnerable you were to critique and peer pressure as a kid? No fronting. You were never that total geek, stop deceiving yourself, Even the ultimate nerd retreated, inverted that pain. Or acted out. We were ALL affected; we just reacted in different ways. And you know you still (unless you can afford weekly therapy) keep and use some of those same traits of self-defence.

Now imagine you’re a ten, eleven, twelve year old with all that multiplied by infinitum – because now it’s on the screens, in the news, in the books, in the teachers. Forever encoded.  That is not information; that is an assault.  As a kid, you are only just starting to develop your cognitive apparatus (which is what education is supposed to promote) so you can be a fully functional, productive human and a positive contributor to the world you live in.

What chance do our kids have when their two-jobs-working-in-debt parents are glued to screens?  Gone is the family backbone, the resilience a family’s values and integrity brings to a kid.  Now they are out there from day one: ‘Here’s a phone and a bag of crisps – go out and do life!’  Our kids are raised by social media and we wonder why they turn into monsters. They enter school with an undeveloped basic core of cognition so learning anything is a struggle and then just the non-stop viral onslaught of pressure, abuse and comment from social media to completely finish them off.

I have taught in hundreds of schools and never before have I met so many dangerously mentally ill kids in classrooms. It is important for anyone to grasp this unless you teach or work with large groups of kids today. They are not anxious – they are traumatized.  It’s non-stop. They can’t be taught; they need help. Getting a good grade is the most urgent need but being a full human is the most important one.

This is why I am starting to campaign for children’s mental health. I suffered myself but to see the state today, I realise there has been no improvement – only a worsening. I am writing far too many statements for Child Protection yet still seeing kids continue to suffer, waiting in the worst kind of Never-Neverland.  Our education and social systems are so archaic and rigidly wrong, it is a crime. A crime to our own future.

These damaged kids are just the tip of the iceberg. Wait ten years til the shrapnel works its way to the brain, heart and lungs, the landmines go off in the soul….stop saying the rise in knife crime is due to gangs. What do you think the gangs are due to?

Us.  Our systems. It’s due to our failures, our endemic  injustice in the very infrastructure of our nations. Fascism is not an ideology; it is a process. And we are all, each one of us, endorsing and part of that process every time we unquestioningly like a zeitgeisty populist post or use the current communication style.  Society breakdown by fascists starts by getting an individual to identify with one group at the expense of another.

No child should have to be oppressed by this stream of abusive narrative. If you’re publishing a narrative of abuse, you are a part of the problem. Kids do not have the context to understand it’s a ‘critique’ of it; they follow what you do, what they see – not what you say.

So either ban phones for under 18’s or start changing the cultural monopoly of narrative. Start helping these kids heal now.  This is the most important decision. More urgent than global warming, than Brexit, than unilateral disarmourment, than your bank account.

Because if mentally, physically and emotionally healthy humans aren’t our future, I don’t want to know what is.