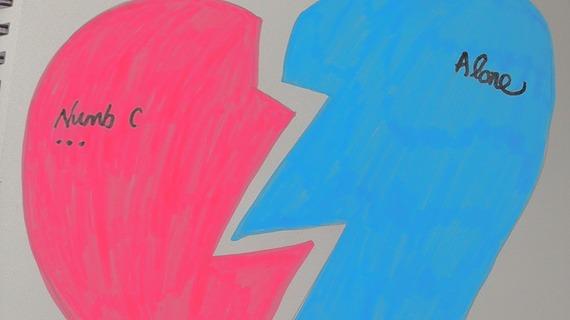 HOW AUTOMATION IS KILLING ARTISTS

In an age of impulsive, compulsive reacting and downloading, we are run by robots - the most toxic environment for rule-breaking, questioning artists

WE ARE CHEMISTRY NOT BINARY

XXXtentacion: 'Celebrities are people too'.

In a world where the robots rule, we follow algorithms, doctor our images, our sounds, our voices and believe we can manipulate our mental health in the same way. But we are not binary; we are chemistry: protons, neutrons, electrons, biology. We are organic matter that, if it is alive, is sensitive and reactive to its environment, both seen and unseen. If a living human gets cut, they yell/bleed. If they don't yell/bleed, it's safe to say they are dead or unwell in some way. Yet today's social norm presents 'mental health' as being callous, cold, unresponsive to hurt.

More than that, we treat those suffering the injuries of life as being deviant, deficient or demonic. There's something wrong with them; nobody ever looks to healing them or investigating the issue that caused the harm.  Having worked in the music industry for over two decades, I have seen so many talented artists, already isolated by fame and success, have no recourse but to vent their pain and trauma on public platforms. Their artistry and honesty gains them even more success entrenching them in the cycle of perpetual mental anguish for economic survival.  It is rare that anyone also sees a regular human being in distress who needs help, kindness, healing or guidance. Such is our society's obsession with fame and material success, equating both with happiness and health.  Besides, it's so much more fun to watch them implode, self-destruct. The spectacle of the idol brings in the cash while the human dies.

What industry is this that would exploit humanity in such a way? When I was writing to Tupac, he was in deep distress, very lonely and suffering from PTSD. He had helped me through  my own depression and anorexia nervosa.  It amazed me that someone who was so 'loved' and famous could be so emotionally destitute.

The more I saw in Hollywood, the more I came to the conclusion that a lot of the most successful people were also the most damaged.  They became callous, commercial and learned how to 'play the game' but, in doing so, lost their humanity which cannot be easily regained once sold.

Is this the only way for creative people to live? And if so, what is the point of life? How are these artists really serving humankind?  What is the difference between an artist and an idol?

XXXTentacion wa s teenage black male growing up in a country and culture that thrives on hate and competition. Where was his support? His family? No one doubts his talent or artistry but these become an artist's only defence when they have no other resource, refuge and are under attack. He was barely twenty when he died yesterday. The human brain isn't fully developed til the age of 25.  To judge young people, especially young people with mental health problems (which is the majority today) is a crime itself.  XXXTentacion's death tells me little about who he was but a lot about the society he lived in as an artist.

Music is often the refuge for many who are hurting but with increased digitisation, decreasing vibrations and increased accessibility to immediate downloading, 'music' as it is presented today has become toxic, a barrage of information and noise and frequencies our already struggling systems have to deal with. And this is particularly worrying as most of us live in our headphones, particularly the young and mentally ill. Music is their world and comfort zone.

But music, real music, should be our world. The earth is just the acoustic conductor for the universe and we are literally healed and brought together by our vibrations. It is how we are made. We may be run by robots but we are not robots; a robot cannot teach me how to empathise, how to react to a vibration. That capacity is unique to being human. A robot can only follow an algorithm.

XXXTentacion's death is a result of a cascade of events caused by a callous society and an industry run by automated algorithms. Spotify's reaction to his music was due to Twitter was due to reactions was due to misunderstanding and inability to empathise, the relentless download wars of an immediate reaction, not a composed work of art considering its impact - not just now but in years beyond now.  Maybe none of the above was the one who pulled the trigger but, cumulatively, each one did. Every day the hate you give little infants is shown through the newsfeeds and algorithms.  For young people without family or community, that is society. That is all they know.

Young people, young artists are our future. And the hate we give them really does F*CK EVERYBODY.  I would love to have Tupac, Amy, Chester Bennington, Scott Hutchison, Avicii and countless other souls still with us but the dollar and our need for the gruesome spectacle of mental pain is still flourishing. We are privileged to be able to enjoy the insight and talents of people who care to share (and many of them don't these days for obvious reasons) but money cannot compensate for the emotional drainage such interaction costs. Who can really meet the needs of their close friends let alone 101,000,000 followers?  A robot maybe.

But artists are not robots.

And robots will never, despite what our philsophising programmers say, be artists because they have no soul. They do not do imperfect. They follow instructions. We don't. We question. We seek. We wander for a home.  A computer does not need to.

Mental and emotional health cannot be automated. We need to develop new systems of being empathetic, of being human if we are to flourish and survive as a species. Just because someone can articulate pain or a problem does not mean they can deal with it.  Being able to articulate is Step 1 but not the end. It is a diagnosis - not a cure. It takes all of us pulling our weight, giving back love, being supportive to raise us to the light. Do not expect an artist to do all the heavy lifting and then scorn them when they fall.

The shooters are the calloused ones who nobody will ever say are mentally ill.  They are just automatically following the rules of society: kill or be killed, grab and go.  We need to question the values of the society we live in when we cannot protect our most vulnerable and talented individuals because they expose our weaknesses.