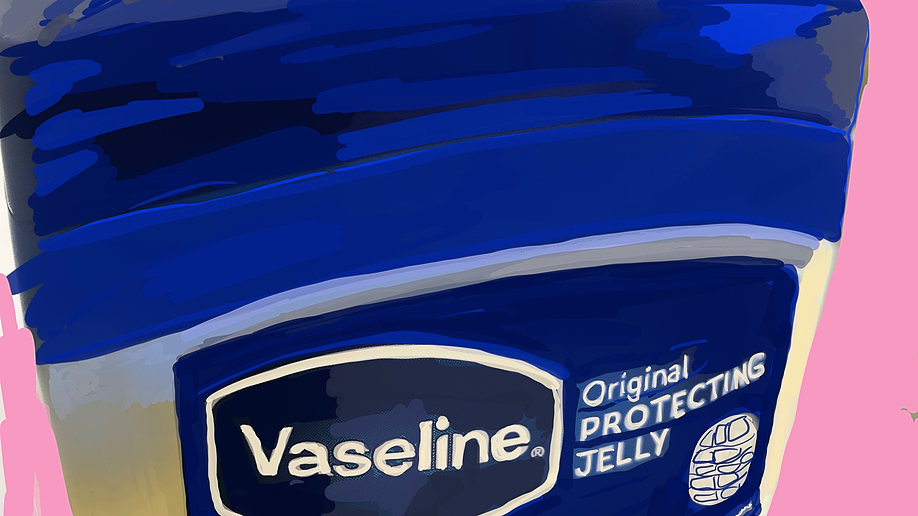 I’ve just listened to a consultant dermatologist on the radio categorically stating ‘There is no such thing as essential skincare.’  Apparently, all we need is soap and water and a bit of Vaseline day and night to lock in the water.  The rest is just marketing and aesthetics.

Now, up until November 1996, this was indeed my skincare routine.  Even while living out in Los Angeles for two years, I only used sunscreen on my body. I didn’t even use Vaseline. Probably good I didn’t have a more sophisticated routine as I returned to Barnsley where Boots had a small shelf containing anything to do with skincare – not a lot.  I also was skint so Vaseline was all I could afford. I had normal-to-oily skin and used the Vaseline night and day.

In October, I went to visit my friends in London.  ‘Wow! You’ve got a nice tan. Where have you been on holiday?’

I insisted I hadn’t been anywhere; I’d had to save up for a coach to London so certainly nowhere exotic.

He showed me a photo.  My face did indeed look browner. I couldn’t work it out. Barnsley was hardly in the tropics.

‘Are you wearing a tanning lotion?’

‘No. I only wear Vaseline.’

His eyes nearly popped out of his head before laughing.  ‘Vaseline!  You’ve been deep-frying your face!’

I was utterly humiliated that a guy knew more about skincare than I did.  And mortified that I had been frying my face.  Yes, Vaseline may be an awesome inclusive for babies’ bottoms but it’s not a moisturiser, has no SPF protection and because it’s made of petroleum jelly, magnifies the impact of the sun on skin.

So that was when my skincare journey started in earnest. The thought that I had survived the heat and pollution of LA and now was returning to make chips of my mush in sunless Barnsley was too much for me. I am sure, since folk are becoming more educated about products, that the appointments to private consultant dermatologists have decreased significantly. Still, it’s a bit irresponsible to state on BBC Radio:  ‘There is no such thing as essential skincare – just soap, water and Vaseline.’

Er…not even sunscreen?  Try selling that to someone with skin cancer.

Maybe she had a face for the radio? But I can’t judge.  She can keep the Vaseline though. Me, I’ll settle for being called shallow, vain and looking after the skin that I’m in.