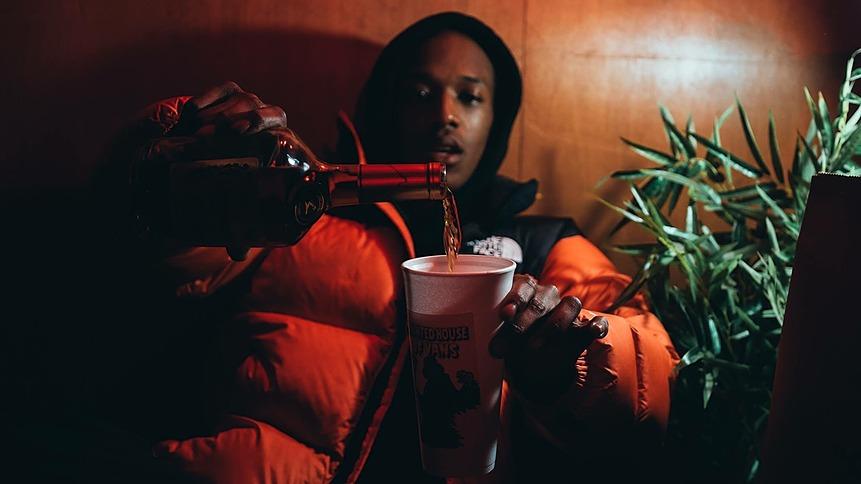 REVIEW OF YUNGSWEGLAWD  by Nina Bhadreshwar

While the collectives have been collecting, audiences have been patiently (and not-so-patiently) anticipating product to match the boasts and hype. Manchester has been sitting on a mass of creatives for time but none more rich than its rap/soul/dub and grime scenes. There have been lone artists such as IAMDDB and Bugzy Malone who have ventured south and out but it’s not because these are necessarily the brightest and best in the north – just  very digitally savvy and the only ones the world got to hear.

That’s all about to change with a stream of new art about to ravish airwaves, clubs, earholes and the big Black Hole otherwise known as the music industry: first out, Black Josh a.k.a. YungSwegLawd and his eponymous debut album.

Black Josh is the youngest MC of the LEVELZ (producer/dj Metrodome is the youngest member by 32 days apparently), Manchester’s eclectic MC/dj/producer collective, but has been carving his own career and sound over the past decade.  Having grown up on the Wythenshawe council estate, he’s used to having to hold his own and then some. This album charts the trajectory of his sonic education as well as his lyrical prowess.

‘YungSwegLawd’ covers two sides of Josh’s life: a previous and a current and how he emerged out of his dirtier, darker youth into an energetic businessman/artist. With 16 tracks featuring a range of artists hot on the radar, he has managed to subtly blend Mancunian street poetry and pragmatism with a sound so deep, a bass so full and grimy, it’s more subterranean than underground.  Frankly, the sound is such a fusion of genres it is a lyric in itself. It pays homage to grime and hip hop but is limited to neither.

MC’s rarely get their dues; they are used to toast and host club nights but often their swift wordplay and Shakespearian anaphoras, triplets and vertical cadences go unappreciated by zonked-out ravers. Plus digital sound systems with their lo-fi do no service to the hard pop of consonants that Mancunian rap offers.  Grime’s preoccupation with speed and lyrical dexterity is worth reloads for sure but the actual stories often get submerged by technicalities.

Not so here. Josh has purposefully paid homage to the genres he grew up in and on while creating his own sound.  The real USP of this album, however, is Josh’s ability to flick the switch between dark, cold I’m-a-mean-Mani-monster and the warmer I-am-a-human-being-trying-to-deal-with-this-shit as seen in the latter tracks on the album. It’s when his voice rises to his natural high octave that the feelings flood out and you get a song  - not a tirade. Not many hard grime can switch on vulnerability in a heartbeat.

But the tirades are good too.  ‘Round Ere’ produced by LEVELZ’ Metrodome and Biome is like a blasted horror movie with its hard, cynical grinding beat, ‘Cult Sag Pt.2’ uses news bulletins and the methods of grime to detail out a seedier time while ‘YungSwegLawd’ is the paranoid Supermac on a mission.  ‘This is It’ featuring former Ape Cult colleagues, Truthos Mufasa (LEVELZ) and Yussuf Maleem is a dark, fun cartoon of a tune while the stellar ‘Judge Judy’ featuring Swaheli rapper/singer Nah-Eeto brings the dark post-apocalyptic rap into a winsome melody.  For me, the stand-out tracks are the most extreme ones: the ultra-dark ‘1000 on Red’ featuring Milkoveli and produced by Pitch and the warmer ‘Thinkin’ and ‘2Fone Shawty’ which are more representative of the Josh now.  However, the clever tracks are the more subtle ones, where he documents the transition from darkness to hope, dilemma to decision through bass and rap.  ‘R Kid’ is the most poignant with its insistent looping rhythm, Con M1’s aching vocals and ‘That’s normal…that’s normal…that’s awful’  showing the verticular drop in morality , ‘Cult Sag Part 2’ is cunning and catchy. Ell Boy’s fuller production on ‘What I Need’ uses vocal layers to warm up from a cold start.  The last track is CiggaWeed’ produced by Skepta. I didn’t realise til I read the album notes; this one has the simplest structure and sample. Still memorable. The themes remain the same: paranoia versus the need for trust, an old soul trying to navigate a colder new world and a passion for life and being happy in the environment he’s in.

There’s something for the clubbing animal, something for the pensive hustler and plenty of gnomic lines:  ‘I feel they don’t make them like they used to….I’m part of a dying breed of creators of the new skool.’  Or ‘This Is It’s ‘We love fast because the hate comes quick’ (Truthos) held up by haunting piano and snares, Cult Sag’s ‘’I’ll take the game into my two hands and smash it like a punk band’s drumkit n instruments” using and remaking the laws of lyrics.

‘YungSwegLawd’ will be an album to reference, to savour and to reflect on the genres that birthed it  - and the new one it begets. You can’t box this one in – it’s ripping up and recreating every one you put it in. An creeping glacier full of lava.