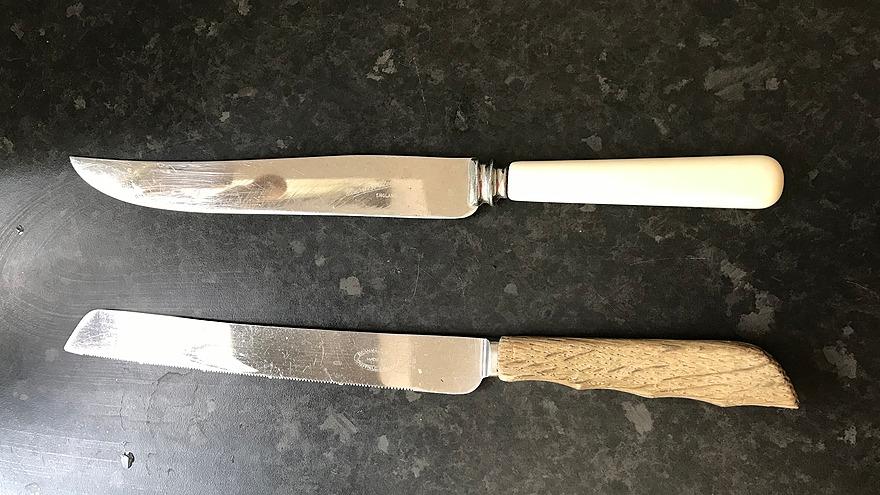 CUTTING TO THE ROOT OF THE PROBLEM

We need to fall back in love through knives.

I can tell a lot about a person by their relationship with knives.  I can tell very little these days by labels, Facebook, Google history, phones.  Information is just surplus, yet more cyber plastic to clutter our heads eternally. It’s actually non-information, non-nourishment. Words spin and clutter our bookshelves, inbox, feeds but they no longer take us elsewhere.

But if you want to know what is really happening, culturally, emotionally, look to the way a society handles knives.

The 90’s took me to California with its obsession with gangsters and guns was no ‘phase’; it was a stage, stage 3 of the cancer that had been eroding the nation for centuries, of hysterical paranoia and the control of a people who demanded justice and freedom.

But the UK is something different. It is fitting, and quite poetic, that the UK should now be defined by Lady Macbeth’s ‘keen knife’.  The British divide and sever, have done for centuries, more centuries than the US have been touting guns, bombs and blasting frontiers, bully-bashing its way into conversations and nations.

No. The British – we cut, we separate. With our words, our consonants, our rhythms, our tongues, our politics, our fields, our education, our class system.  We are structured through knives. Sheffield steel, Master Cutlers, knives international. That’s the UK.

And yet the dichotomy is, as an island, we long to be whole. We have this innate urge to be multicultural, multi-flavoured, multi-colourful, magnificent and marvelous. We are so desperate to belong it’s a physical pain. United Kingdom.  Oh the irony.

My own issue with knives began very early. First off, I refused to use one. I was the grandchild of farm labourers and my Nana’s carving knife, my mum’s bread knife were sacred items in our homes.  ‘Do not touch the knife. It’s sharp. You will cut and bleed.’  But I’d watch my nana gently carve up the chicken or ham into perfect thin slivers, my mum slice her own baked bread.  I was in awe of the reverence and gentleness with which they handled something so powerful, cold and dangerous.

But I was scared of the steel too. I wouldn’t use a knife. My first school dinner at Primary School aged four was beetroot and spam. I couldn’t, wouldn’t use a knife so couldn’t chop the spam and was laughed at. The beetroot was my friend though. Already bloody from the earth’s womb, it was docile to my fork’s edge and so beetroot remained my daily staple to this day.

And then of course, I was the eldest daughter of a Gujerati countryman, a tailor from a low caste who had grown vegetables out of his village’s dust and lived off the land, revering it like a live body.  I couldn’t help but notice the regal way he handled a knife – like a scalpel, a paintbrush with a blade.  Indian farmers are not butchers like Europeans; they are artists. Their knives are different, round at the end, not pointed, sharper. The flexible use of the same flat blade for the most intricate slicing and the removal of fruit from clingy roots is due to the handling. The vegetarian farmer uses a knife like he is a surgeon. In fact, watching my dad sculpt into an orange (‘Dad, make me an orange with slide on and a swirly peel!’) I understood why the transition from gardener to tailor to surgeon was natural and just the progression of an art and a passion. My dad used the same knife my  mum used for chopping onions and carrots, hack-sawing marrows, but in my dad’s cool, elegant fingers, that knife was an instrument of delicacy, skill and pure love.

When the Keshar mangos arrived in a cardboard-lidded, straw-filled box every May, it was the ritual of my dad’s carving, the shape of the slices, the geometry of the segments falling away so cleanly, allowing the light to glimmer on the spectrum of gold, fluorescent orange, deep amber and butter yellow that those plastic-packaged crude cubes can never reveal. I was able to see, feel, taste, touch the mango in all its awesomeness. Even the sound of his gentle knife on Pyrex ignited a Pavlovian reflex in his children, summoning us from the corners of the house to savour the ritual through mouth-slavering anticipation. But the sensual delight was intensified by watching the skill of the cut.

The lardy miner on the theatre table, abused by cold dark coal caverns and capitalist bosses, the redundancy of a hopeless socialism and poverty, was transformed into an obeject of genius, the product of an infinite love and science so deep it deserved worship. I passed out while observing the laminectomy, when I saw the huge blade; my father was a slight man with long thin arms and slender fingers. Here he was wielding a machete into fat and muscle, bone and blood.  Afterwards, when confessing I could never be a doctor, I asked how he couldn’t panic when a life was under his knife. He told me: ‘The choice is always under my knife. Every incision is a decision.  It’s just being professional.’

But I didn’t believe him. It wasn’t just professional to him, it was personal.

My mum had her cancer removed with a surgeon’s knife but this surgeon wasn’t precise enough, didn’t cut deeply enough. The cancer lingered, rooted and grew.  The knife was misused, mistimed, too late, too clumsy, too little love. So the cancer remained and spread and she died. She could have been saved by an accurate, caring knife.

When I’m agitated or anxious, I watch Youtube videos of Gujerati farmers preparing vegetables for cooking in the open country.  They have just a knife, a flame, a block of wood and an iron pot but create dishes so sensual I feel like I’m  eating the same meal from the same earth with the same birdsong.  It calms me down, just watching how they handle the blade and the fruit.

And then I look at the news, on my streets, in my classroom where our relationship with knives is still taken from Shakespeare’s Macbeth: a blunt hack of a dagger to brutalise, deform and mutilate. It could be a butter knife or the highest quality Japanese       Santoku  - the effect is the same.  We our inept, clumsy, crude. Just pure ugliness.  We treat our land like it is a piece of old meat to be chopped and chunked, our food is just for consumption and shitting, people are walls or obstacles to cut through, hack into, destroy like the uncultured raw rude savages we once were, we now are.

For we forsook the life of faith and love that brought us back from the brink of our savagery.

Our youth declares the truth, the cancer we dare not face: We Do Not Love.  Ourselves, our planet, each other, our Creator.

We hack and hunger and act horrified at statistics – like they are something apart from us, instead of the very cancer at the core of us.  Politics will not remove knife crime, only justice and real love, love that will cost  in pennies, pounds, people and patience for the poorest instead of treating them like valueless product.

I’ve never learned to use a knife; my hand bears testament to my inability – a diagonal scar across my left palm barely missing a crucial nerve (a breadknife), an almost severed finger tip (when I decided, post-rave, that preparing a vegetable soup at 6am was quite reasonable).  A combination of Reynaud’s and clumsiness, I’m not even any good with a simple Stanley knife. My father knew it and would get very worried whenever I bought a new kitchen knife.  ‘It’s very sharp. You shouldn’t use that.’  I would laugh. ‘It’s just a knife, dad. I’m 30! I can use a knife.’

Why does our country create killers and not surgeons? Why are we not taught to love before we are given a knife, a pen?  I am learning to love through my pen, the only knife I dare use – and that is dangerous enough – but it is a slow and painful process. But we use every instrument of expression like a hacksaw or a weapon, from our phones to our cutlery to our tongues.

The youth are always closer to the truth. Their exploding amygdalas connect with extreme passion with the core of the chaos that controls them.  In California, it was the covert conservative government controlling countries, invading and distributing guns, drugs, ruling by fear and violence.  Children follow the leaders. They don't question them. It's a primal animal instinct.  In the UK now, while our government cuts, divides, tears apart, consumes for profit and mutilates, the youth can do nothing more than follow the leader.

So we need better leaders. When crime is more organised than the appointed government, you know you're in trouble.

The only revolution necessary is a heart revolution. We need to learn how to care. Then the knife crime rate, the climate change issue – both will be solved.  But that needs revival and all I’m hearing right now is more of the butter-knife butchery baloney.