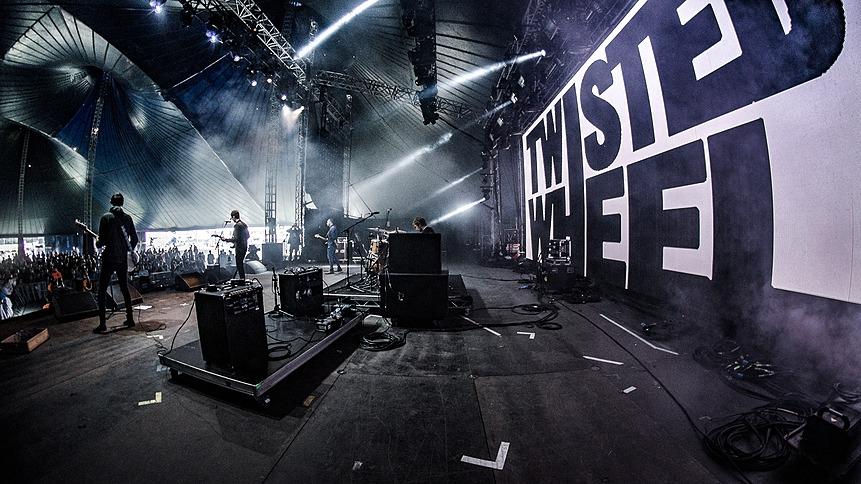 The last official weekend of British Summer and Friday 24th August has Twisted Wheel crammed into their splitter van off to Leeds Festival at Bramham Park.  It's morning, campers are still waking up while Twisted Wheel are setting up. But when the band take the first slot at 12 noon on Radio 1 stage it's with the fire and fury synonymous with the band, roaring through 'Lucy The Castle, 'Weapon', 'One Night on the Street', 'Rebel, 'Strife', 'Let Them Have It All', 'Johnny Guitar' and 'You Stole The Sun'.  They may have been first up but a crowd of 5,000 make sure they would not be missed.  When the band go over time, the plug is pulled halfway through 'You Stole The Sun'.  A pointless exercise as the crowd continue singing the rest of the song so, unofficially, the band get the extra 3 minutes anyway.  It's only midday and bodies are on shoulders, singing lyrics back and dancing with a year's worth of saved up festivalism.  The band then escape the watchful shepherding of tour manager and minders to disappear into the festival crowd and enjoy the next 24 hours off-radar.  Leeds is particularly special to both Jonny and Adam. If there was no Leeds festival, maybe there would be no Twisted Wheel as it was here 11 years ago that the two school friends reconnected and decided to form the band.  Jonny found Adam in a sub-woofer in the dub reggae tent and really there is only one way to get closer to the music from there...

Saturday sees a 200 mile van trip down to Aylesbury, an early night and up, big breakfasting and at the site for 8.30am. Despite the about-face weather change - banging torrents and traffic trouble - this is the band who stole the sun and put it in their back pocket for days just like these.

4,000 early birders rush in, resplendent in bin-liners, kagouls, wellies and the ubiquitous Drowned Rat look. But they are grinning ear-to-ear. This is Reading, it's genuine mud/rain/British festival time and there's a real live rock 'n'roll band ripping up the Radio 1 tent. What's not to smile about? The party has begun.

As polite southerners do, it's not as raucous and full-on-crowd-anthem-stylee as Leeds but there's an obvious, tangible thrill in the air. The set list is tweaked: 'Lucy The Castle', 'She's a Weapon', 'One Night on the Street', 'Rebel', 'Strife', 'Jonny Guitar', 'You Stole The Sun' and 'We Are Us'. Down here, the favourites seem to be  from the new E.P. - 'Rebel' and 'Jonny Guitar'. The crowd sing them back word-for-word. Not bad for a cold, wet Sunday morning in a tent.

Steam rises. Festival heat is set off by the band that brought the rebel groove back to British music. 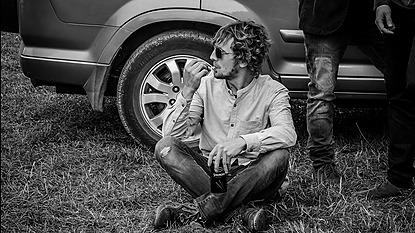 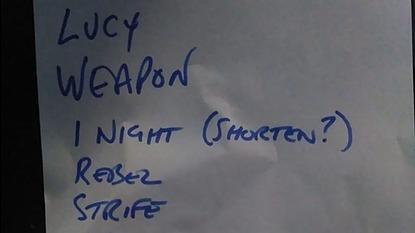