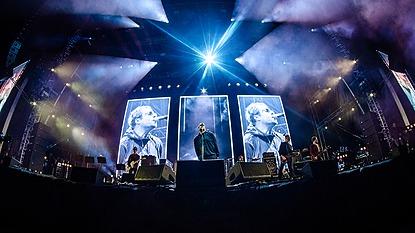 A NORTHERN POEM built from a group of northerners who have all battled against odds, demons and obstacles in their quest for excellence and recognition.  It is only fitting that they play at Old Trafford's Emirates, Lancashire Cricket Club, one of the few first class county cricket clubs in the country. Cricket is the gentleman's game where fair play and justice is top priority. It's where the real hits the steel, the game reveals the truth. It is a work of art to put on this show at this time with these specific Mancunian artists. A righting of wrongs and a celebration of rights.  (Photo credit: Trust A Fox).

Each artist on the line-up has struggled to sing their song and be acknowledged for who they were and what they were bringing to the table. Twisted Wheel is the Saddleworth-born band that just will not quit, despite relentless assaults. Jonny Brown has somehow spun it through several revolutions and far too many Russian roulettes but The Wheel is finally emerging as a vital relevant voice with the ability to find the rock 'n'roll in the worst and the wasted. Despite industry naysayers, it has outlasted its 2008 major-label-signed contemporaries and accrued a swelling fanbase through taking a different route: non-stop, grassroot touring and solid structured song-writing.

Bugzy Malone, aka Aaron Davis, is the 0161 grime rapper from Manchester with a life history that reads like the backstory of The Wire/Scarface. Despite the dysfunction and racism he was born into, he conquered through rhyme and reason, eschewing the commercial route for authentic tunes and real-life poetry. Single-handedly, he built his own success and empire through mixtapes and videos, breaking into the top 10 UK charts time and again and his debut album 'B.Inspired' looks ready to follow suit with rave reviews for his poetic range and styles. He is known for breaking new ground in grime, both in business, in lyrically  precise content and in his sure-fire rap style. At 27, without the industry's interest, he is a self-made millionaire through his DIY musical empire.

For anyone born after 1970, Richard Ashcroft is synonymous with all things British and rock'n'roll.  From the start of his career as the lead singer and rhythm guitarist of the seminal 1990's band The Verve, he catalysed the music-as-power, band-in-a-field movement to a whole other level.  Along with Ian Brown, Ashcroft was one of the main inspirations behind Oasis. As a solo artist, Ashcroft has continued to battle against a toxic institution at odds with his ideals for music and humanity. Born in and for another time not controlled by binary, Ashcroft continues to be the voice of music's reason , creating new perimeters with a constant flow of seismic material.

And last but by no means least, the main man, Liam Gallagher. The voice that makes you believe. It should have been 'made a generation believe' but time has proven it goes beyond that. His is the Mancunian call to hope and belief in the bleakest of times. His courting of chaos and controversy and his fearlessness in facing age, his demons and going solo only stacks up his credibility as one of the last true authentics. Honest to a fault, the irony is in the label of arrogance when he is one of the humblest in rock 'n' roll, constantly referring to his inspirations, band members, mentors and the audience who he calls the real stars. It may be borrowed from Ian Brown's ideology but LG takes it all further, claims nothing for his own that he won't share with everyone.  If ever the world comes to an end, they will have to get LG to sing about it before we believe it. The generosity and curation of his hometown show demonstrates the man this Manc's become. 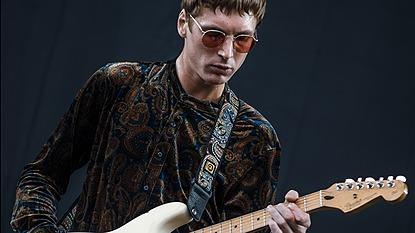 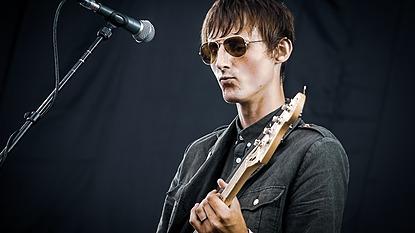 The soundcheck is running late. 1.50pm has turned into 4.05pm. A huge breeze lifts the flags and yellow jackets pepper the grey yawning cricket ground. Twisted Wheel hang about in the splitter van, writing and rewriting the set list having learned they've been gifted with an extra five minutes.

At 5.20pm, they stride on stage at the Lancashire Cricket Ground as the audience pours in. Even though they are first up, they have a keen 17,000 audience and growing. As they burst into the ecstatic 'Lucy The Castle', the roar starts and the intro to an incredible night begins shifting gears, scenes and energy. The synchronised melodic mayhem on 'Weapon' follows. Twisted Wheel's bare-bone raw knuckle rock'n'roll is evident: Clarky's drumming from his own upholstered crate (his granddad's) and Brown's foot to the pedal board. There are chants and nods from the audience. Harry Levin, the bassist, leans in, dives and thumps his bass with conviction as the Manchester story soars overhead: Strife, painting pictures of life, a song plucked from the gutter sung to the sky. Fists and phones are in the air and the five second pause allows for the affirming roar from the crowd.

Richard, the newest member on rhythm guitar rocks and rolls literally towards his mic as the final cymbal clash precedes the announcement: 'We are Twisted Wheel!'

Next comes the requested 'Let Them Have It All', a call to arms and soundtrack to any mosh-pit, the most-used hashtag possibly after the obligatory #liamgallagher. Men, women, kids and granddads, all dancing, pumping fists.

'How you all feeling? This is a big show for us.'

The autobiographical 'Jonny Guitar' , off the new chart-topping eponymous EP, comes next followed by the rebel-cry of 'Oh What Have You Done' and the feral ballad 'You Stole The Sun'. Swinging arms, sweat and shoulder-riding to the rant of a frustrated Manc, the aggro and beautiful roar of release.  Beer and balloons are in the air, everyone's there chanting: 'Wheeul! Wheeul! Wheeul!' 'One Night On The Street' pushes into the gifted time with the toms and the gutter.

'We've been Twisted Wheel. Thank you very much!'

With two minutes out of the can, the band finish with 'We Are Us' - surely a theme of the night.   Music this fierce, this bold and beautiful rips the grey off the hard skies and wraps you up in raw joy. 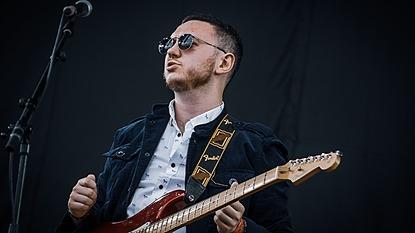 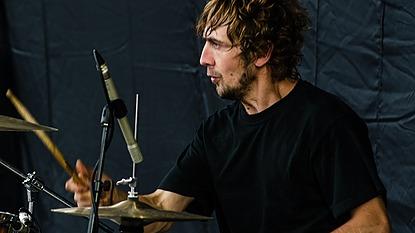 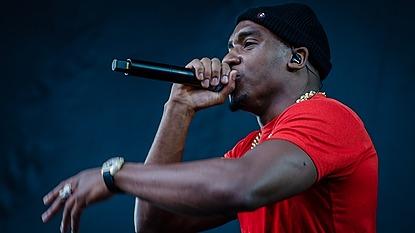 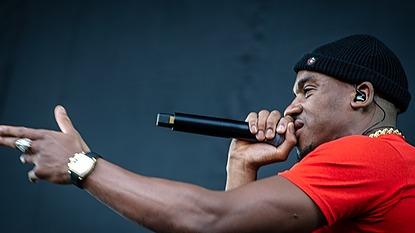 Bugzy Malone may, to the uninformed, seem an incongruous choice for the Liam Gallagher gig. But that rather proves the folly of the question than the choice.  Bugzy probably has more in common with Liam than other rock artists.  They are both consummate professionals, battling their own demons as well as reputation and institutions that have spent decades working to destroy them, both see 'ordinary people' as being very far from ordinary, both have fierce love for their home city and northern soul. Bugzy earned respect on the grime scene through his rapid-fire delivery and sophisticated structure of genuine 'songs' - not just tracks.  He is one of many regional grime artists breaking the genre into fresh fierce territory post-commercialisation and globalisation of grime - always a very dangerous time for a style and culture.  Bugzy pushes through, referring to Oasis, The Verve, The Eagles and The Stone Roses as well as the expected grime references in his latest album, 'B.Inspired'. Translating a studio album to stage is a different matter but Bugzy's boxer-fit frame and fast-pace keeps up with his DJ Piper. The crowd have lighters and phones in the air, Bugzy talks to the audience as well as the frequent: 'Make some noise for yourself right now!' and they echo his words back, a testament to an intense connection as the album has barely been released. The coiled intense energy of this guy fills an entire stage with his words and presence. Not afraid to mix up the pace, he delivers not just his trademark ricochet rap but slower, more considered rhythms and syncopations. He knows how to work an audience with his take on the 90's 'Whoop there it is!' to 'Oooh there it is!' The audience swells and falls for this new breed of chronicler. Gangsters may have raised him but right now he is raising Manchester. He acknowledges the generosity of Liam Gallagher: 'The most important guy - everybody came here today to support Liam Gallagher. He has brought people together!' With this and a cheery stream of 'Ole! Ole, ole, ole!' to get the call-back from the audience which has punctuated the entire set, he leaves.

Richard Ashcroft is the voice behind all of the voices somehow in some way today.  He is the one who has been on a mission for live music and music as community for decades and now, in his statesmen years, makes it even more explicit. Running through his transcendental set with the incendiary Damon Minchella, he yells out midway: 'I love this fucking country! Never will we stop gathering together and playing live music.  Never. That's what we do.' 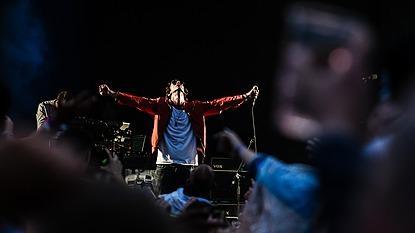 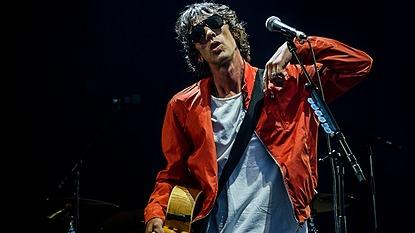 He is the first of the real ones, the urban hymn-writers. Sweat and soul pour off him. Even when on his own on stage with an acoustic guitar, he has enough to give more.  The seminal works that jiggered a generation's consciousness kick in: 'The Drugs Don't Work' and the full band join him for a roaring final bar.  Ashcroft points to the sky.  'Have you ever been down?' He's kneeling on the stage.  'Well, I've never prayed but tonight I'm on my knees. I need to hear some sounds that recognize the pain in me.' The Bittersweet Symphony is sweeter for lasting and sustaining us so many years now.

He needed it, it wasn't there so he created it for all of us and now this audience sings the same comfort back to him.  What you are returns to you - times 50,000.

Liam Gallagher takes the stage, quiet as a shadow. But when he roars into 'Rock -n Roll Star', he claims his territory.  His dreams didn't work out the way he planned but somehow he took up where others had given up and has built something quite undefinable yet undeniable. Something that is shifting a land and a consciousness beyond his own generation and ability.  With a band of classical musicians, horns, violins, piano as well as accomplished guitarists and friends such as Jay Mehler, Drew McConnell and Paul 'Bonehead' Arthurs, he tears through songs with a depth of expression beyond his younger self. In between the 'What's The Story?', 'Greedy Soul', 'Wall of Glass', 'For What It's Worth', 'Bring it Down', 'Champagne Supernova' (done on the piano), sixty foot pic of Arethra Franklin for 'It's all for you', 'Better Run' - his claim to his mission in the wake of irrepressible leaders and entertainers (let's face it - most men in his financial position with a beautiful girlfriend would have called it a day and retired to a villa in Spain instead of exhausting himself through jet lag, buses and a gig-a-day-touring), violin gear-shifting in 'Whatever',  the trumpet and saxophone for 'Supersonic', 'Some Might Say', the roar of 'Cigarettes and Alcohol', 'Wonderwall' - stark and reinvented, 'Spaceman', and the final 'Live Forever' are softer, more thoughtful and melodic tracks, like the not so well-known 'Soul Love' but all the more touching for the intimacy of emotion.  Liam raises the hand of Richard Ashcroft towards the end in a fitting gesture of recognition and respect and the two comrades both paid tribute to the 22 lost in the Manchester bombing with the number flashing on the screen behind them.

Liam Gallagher - the guy who everyone expected to sell out at 30 and relocate to LA is the only one who put his shoes back on and went out and did what no one else was doing. And raised a nation back up on its feet again. 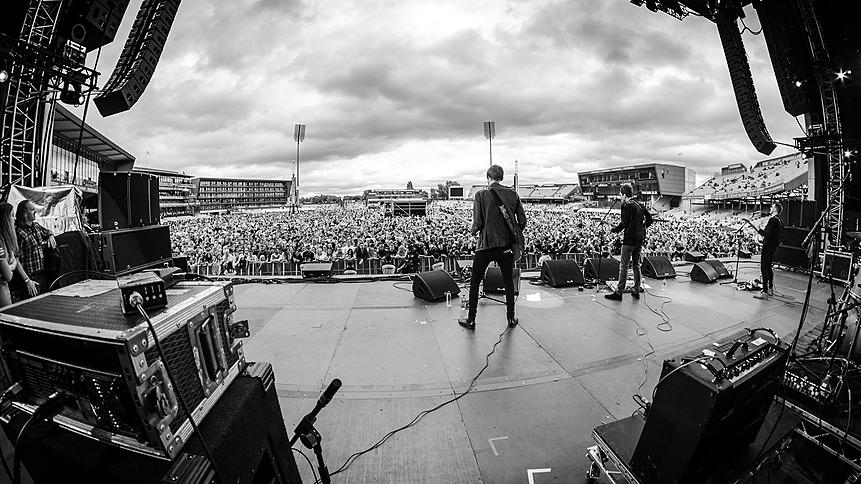 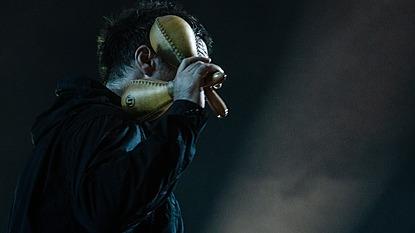 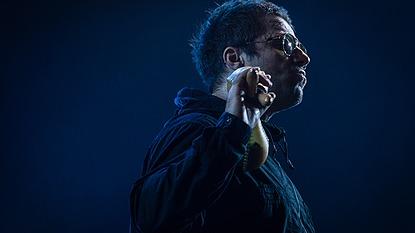