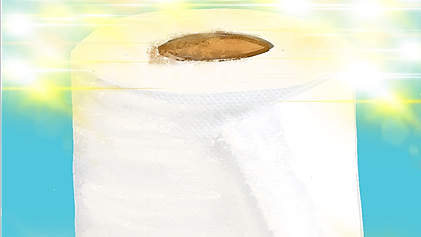 The global pandemic of Bingeing on Toilet Paper - what's going on?

Today, people, we are going to be talking about s**t.  S**t. S**t. Merde. Poo. Excrement. Defecation. Twosies. Waste material. Kaka. Whatever you like to call it, it’s still s**t.  So why is it such a dirty word?  Everyone knows what you mean when you say s**t. Or do they? Because s**t is actually an existential matter. It’s the one thing we can’t escape. It’s the one thing we do which proves we are alive and we are an independent functioning human being with free will shown by the controlled elimination of our own waste.  It’s the first thing we gain and the last thing we lose thereby proving we are no longer an independent human being with free will and control of our sphincter muscle.

Which is why the mass toilet-paper-buying phenomenon is not just a laughing matter.  I mean, why is it , when faced with a life or death crisis, we worry about toilet paper?  Not corona virus, not the global crisis or planes or money but s**t – will we be able to hide or get rid of our s**t?  Will we be able to control our s**t?  And it appears right now people are losing their s**t because we are having another global pandemic: the urge to buy obscene amounts of toilet paper. Without a doubt, people are losing their s**t at nuclear level.  Yes, you.

Unless you’re an Indian, you probably won’t know the reverence that surrounds the notion of s**t and who gets to clear it up.  And unless you’re an Indian of a certain caste level, you won’t know the significance of the daily bowel movement. My father came from a relatively low caste level, not as low as the lowest but just low enough to know that the next level was the ones who had the job of clearing up everyone else’s s**t, the latrine cleaners – the untouchables – who have the job of washing out the toilets.  Other members of society keep well away from them. They are not allowed to worship, cannot be part of the community, cannot get an education, they cannot eat the same food. They get given the leftover food -if they’re lucky – and even then it’s seen as an almsgiving.  And yet they clear up s**t every single day.  They are exposed to germs, poo and rot but that’s not only their job – it’s their given identity from birth to death and their progeny’s, who they are in life. They cannot move from there.  Yet their role is vital.

It’s vital because defecation is the first sign of life. If you have a good healthy bowel motion, it proves you are in control of your life. You have a good day. If you’re constipated, you are having a bad day; there’s something wrong with you, you are physically or psychologically ill if you cannot shift a poo. If you have the runs, likewise you are sick. You are to be avoided. You cannot control your s**t. So obviously your s**t habits tell us a lot about where a person is with their life, more than their Instagram, their resume, marital status or credit history.  Your s**t tells the truth about your daily living as any stool analyst will tell you.

So why am I talking s**t right now?  These things are important and tell us that all we can do, all we ever leave this planet is not our energy but our s**t. Is our s**t good? Is our s**t bad?  There is good s**t, bad s**t and then there is real s**t.

I learned this during my sojourn in Los Angeles living in impoverished marginalized black and brown communities in the world’s most powerful modern economy at the time: the USA.  Until then, I’d always had problems with my s**t since the age of eleven: digestion and absorption. I’d had various investigations but no help til I had to manage it myself and just became a functional but disordered adolescent, trying to control it through self-medicated laxatives.

I ended up living in a community with no health services who explicitly talked about the distinctions between s**t: there was no s**t, there was bulls**t, there was bad s**t, there was good s**t, sometimes there was the s**t, awesome s**t, holy s**t and, once in a blue moon, the real s**t. I realized that these folk were connoisseurs of s**t; there was real sophisticated nuance about their fine distinctions between s**t. I realized that I was living among folk who had learned there’s no such thing as ‘having lost it all’ as there is always more to lose and until you understand the preciousness of s**t and the different qualities of s**t, you are not in control of your s**t and not able to handle s**t, either your own or somebody else’s. My epiphany occurred when I was living in one of the s**ttiest places on earth amongst a people whose only inheritance and currency was s**t.  The vocabulary, the experiences and the stories I was given helped me to understand . Then, when I started experiencing s**t, real s**t, the sort that sticks s**t, I really understood.  I own that s**t.

The last thing my dad left this earth was a huge ginormous bowel motion. He produced the biggest poo of his life and then he gave up the ghost and I always feel really, really proud of him for that because he was a very tidy organized man for whom bowel motions were as essential as monogrammed laundered white cotton handkerchiefs.  He left this earth good s**t when he exited and he did it with style. I mean, we all come from s**t and we’ll all return to s**t. That is a scientific fact we can’t escape. We may delude ourselves we leave our art, our energy, our treasures, our discoveries, a legacy, our DNA and our this, that and the other but when it boils down to it, we leave it our s**t and we become something else’s s**t.  And that’s what we are, in essence, and that’s good; it’s what makes the world go round.

Yet as we get older, if we’ve never really understood how to control our s**t, losing your s**t, losing a sense of control is one of the most frightening humiliating experience in the world.  What has amazed me, therefore, in recent days, is the Toilet Paper Cult. Because corona virus may have many awful symptoms but diarrhea is not one of them.  So why are people binge-shopping for toilet paper?  It’s not because they are anticipating mass s**ts; it’s because they fear they are losing their s**t, they can’t control anything and the most basic thing you need to control is YOUR S**T.  The most important thing you can do for your child is to potty train them, teach them bowel independence. If you never did that as a parent, you really have little right to claim a mummy or daddy title.

S**t.  It is everything.  Freud was so right. When I was growing up, I wasn’t even allowed to say poo, even in the playground, or number 2. I had to say ‘big piece’ and if I had ever, ever said the s word I would have been sent to my room for ten weeks and probably reform camp.  Seeing as this self-isolation will be for far longer, I reckon to heck with it! Might as well get it all out there. S**t was not something you talked about; it was something you got anally restrained about and constipated about and ended up with twenty five years of a disorder about.

Only now when it’s most likely no one will ever come remotely close to my s**t ever again and we have lovely sanitized social distancing do I finally feel free enough to talk intimately about my s**t and the apparent ‘holiness’ of toilet paper.  Like toilet paper is the Saviour of the World, the Cleanser of Our S**t, the Remover of our Transgressions.

Sorry – it’s not.  Even if the advert makes you think it is.

I have exactly 2 rolls of toilet paper in my cupboard – my usual weekly quota and I don’t anticipate living so long that I lose my s**t to the extent that all I think of is Bog Roll Hoarding.  If Jesus Christ did not despise a body made of s**t that s**t every day, then who am I to?  I am grateful for what my body is in this life, with all its weaknesses and vulnerabilities. That is how I was created.  I will not find salvation through Andrex or a vaccine or a laxative.

So yeah, I am s**t. I talk s**t and when I die, I will leave s**t.  But I am daily grateful for every lavish mercy and blessing that I have had added onto my s**t like: air, thoughts, physical motion, electrons pulsing across neurons firing synapses, a beating rhythmic 24/7 pump of a heart, a smile, my own teeth, ears that pick up vibrations, skin that tingles.

Yeah, Lord.  Air, electricity, chemistry…and Your Love, your Risen Power without which I am, quite frankly, s**t.