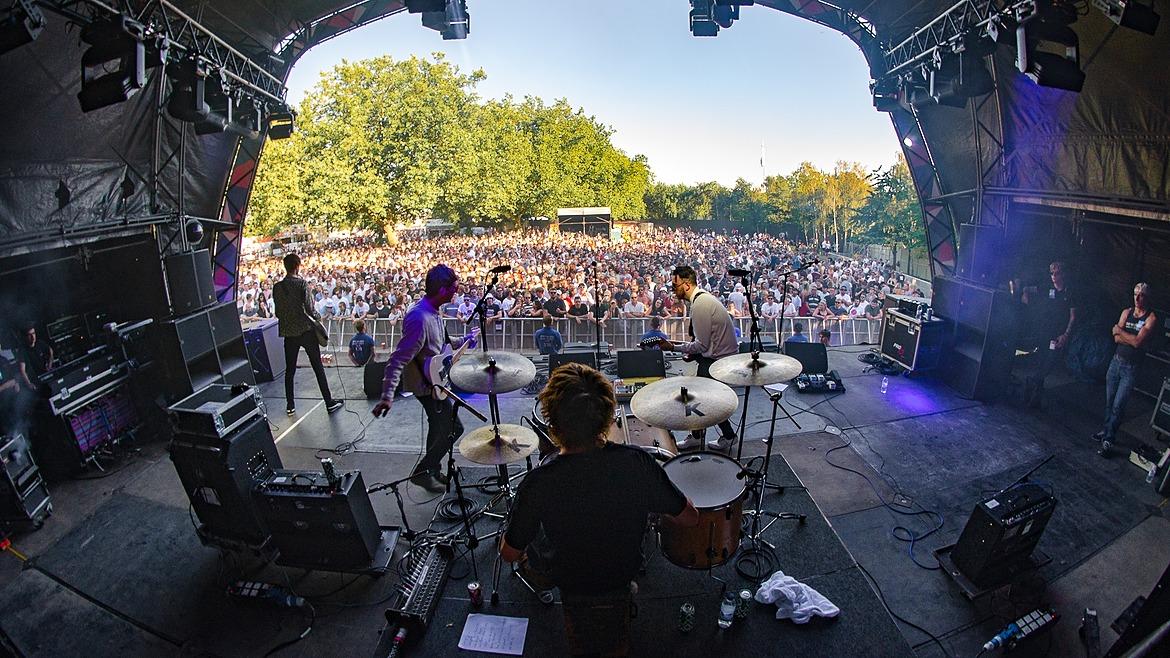 The band of relentless underdogs charted at Number 1 with their new EP, 'Jonny Guitar' - twenty minutes before hitting the stage to support Liam Gallagher at Finsbury Park, Friday June 29 2018.

Twisted Wheel have had an uncomfortable journey. Drop offs. Pick ups. Traffic jams. Detours. London heat.  4pm Friday traffic. Being trapped between red double decker buses. Liam Gallagher concert crowds. The confusion of three conflicting SatNavs. Four backseat drivers. All this means arriving at Finsbury  Park on time will be a challenge. The Twisted Wheel boys are stripped to their boxers in a sweatbox of a van, hyped and frustrated.  This is an unusual gig on a 28-degrees-physical-format-charting Friday.

Previously, the music world has never known quite how to place the outfit fronted by Jonny Brown. The band were picked up and launched in 2009 by Columbia as 'lad rock' on the wave of Arctic Monkeys, The Libertines et al. But they didn't quite fit the square hole of indie rock. Twisted Wheel is a round peg in constant motion, with surreal lyrics and as many observant, slower ballads as the raging punk anthems - both delivered with the sincere immediacy of raw rock 'n'roll.

But the band's very real rollercoaster lives led to several implosions, various new line-ups before Jonny was left alone spinning acoustics and addiction having driven The Wheel into the ground by his own self-destruction.

Or so he thought.

Instead, with terrifying sobriety, came a return of confidence, creativity and new songs. After tentatively recording some demos  last October, he started playing with the idea of a band at the end of 2017 before launching the real deal in January 2018. Since then, the band has been rehearsing new and old songs, working closely with Dean Glover at Vibe Studios, Manchester and throwing themselves into a brutally honest 'Snakes and Ladders' tour to every town they could in the UK in between recording a new EP 'Jonny Guitar'.

Launched first in physical format on 22 June, the EP reached Number 1 in the UK Charts a week later, twenty minutes before the band played support at Liam Gallagher's Finsbury Park gig and the digital download was released.

Frontman Jonny Brown:  'I must admit it brought a tear to my eye knowing what a struggle these past years have been and thinking I'd really blown it all. I'm so grateful that everyone feels this EP as much as we do.'

And he heads towards Stage 2, little realising that the two hundred scattered across the ground half an hour ago has now swelled to a sea of endless crowd to Stage 1 by 18.50pm. The band open with the roar of 'Lucy The Castle' and 'Weapon' from their eponymous album and the bar is set for an intense, uplifting set. Heads are nodding, feet shifting, smiles appearing on the surly overheated bodies. But by the time 'One Night On The Streets' kicks in with its staccato intro and irresistible backbone of a beat, everyone is chanting the chorus with vigour, fist pumping the air. This energy rolls into the 80mph 'Let Them Have itAll' which screeches to a halt for the all-time anthem 'Strife'. Such a poignant, bare ballad evokes genuine devotion and word-for-word chanting, proving passion comes from the most hopeless of places. Brown's gnomic observations and the idea of a Sheila somewhere shaving her legs with a potato-peeler is so elementally concrete, it is already part of us.  By now the crowd are totally in the band's hand and when Jonny announces the new EP 'Jonny Guitar' is Number 1 in the UK charts and thanks them, the crowd erupt in a huge roar with football chants of 'The Wheel is coming home...it's coming home...it's coming.'  'Jonny Guitar' pogos between its raw poetic rhymes about the lowest point in The Wheel's career and the insolent joy of its chorus, enthused with aggressive hope. Twisted Wheel's ability to create a very specific emotion through the ancient structuring of minor/major goes past composition. And it's this which incessantly lifts up crowd after crowd.

'You Stole The Sun' is appropriate for a blistering day where the culprits are clearly on stage. The crowd have been surfing, moshing, cups of beer, water hurled in the air, bodies on shoulders, 40/50 somethings grooving and singing back next to pink-haired students, baseball-capped, white t-shirted black youths and frenetic teens. This is a diverse and passionate crowd whose obvious joy is contagious. The short set ends with the familiar, 'Oh What Have You Done?' and 'We Are Us'. The band all take a rest from vocals as the crowd returns them at full volume. This song says exactly why Twisted Wheel continue, despite predictions, trends and being kicked to the kerb. It only makes them more real, more resourceful and more relentless.

They create pictures of life sung in stolen sunshine. And that never grows old.