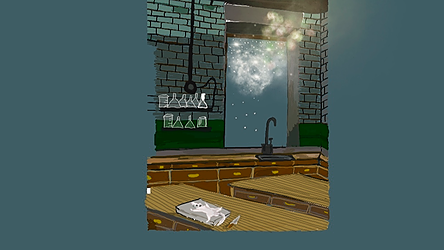 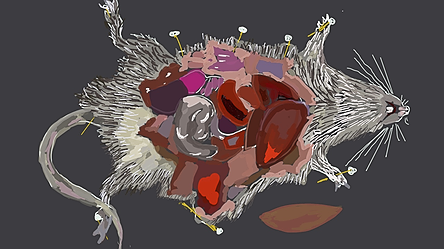 The New Year, synonymous with January, always filled me with dread, depression and despair.  It was the weather, it was the grim north, it was post-Christmas comedown, it was my constitution.

Triple A level biology Monday mornings (yes- triple!  And they were fifty minute lessons; people get lesser sentences for rape); dissecting a rat pickled in formaldehyde ( stored in the science teacher’s 1940’s bread bin with the other pickled rats during the week); in a freezing ancient science lab, thick snow falling – meaning we’d probably have to walk home from Staincross – a good extra six miles.  That was if the school bus came.

And, lastly, my mum was dying of lung cancer.

I had totally fallen out with God for several months by now.

On this particular Monday, we were removing the lungs of the rat.  Rats have several lobes to their lungs it seems.  I kept thinking of my mum’s lungs and her slowly drowning in the thick gicky stuff that was filling up the diseased alveoli and my heart was splitting.  There. In that science lab.

I looked up at the full white relentless cruel sky, as impenetrable as I felt God was right then. The snowflakes falling so slowly, so big you could actually see them. The windows of that freezing science lab so huge, over ten feet high and five feet wide, they framed this slow catastrophe as it unrolled before me.  I was mesmerised.  That’s when I noticed each flake was incredibly intricate, perfect, beautiful.  And different.  Different until they connected with each other and somehow all their differences fitted together and they became something entirely different to what each other was before.  They were not a sum of two units; they were a new entity, a force that changed landscapes, carved valleys, broke down soil, froze life.

This here was magic.

It was death unfolding.

It was life unfolding.

Right in front of me.  The act of creation.

This God, far from being impenetrable, was here in this lab with me, and outside me, falling from heaven all the time, working all the time.

All those years ago and yet I still remember every January that science lab, the dead rat, the snowflakes, the lungs…and when the day I committed my life to following Jesus.  I reckoned, if he can make snow, if he can speak to me here, at such a time, in such a way, he can make me, he can change me.

So yeah – that was my epiphany.

There was no preacher in the lab, no paraphernalia apart from rusty Bunsen burners, chipped beakers, pipettes, scalpels and dead rats. I could have been high off the formaldehyde, true, or maybe to piss off my atheist wire-haired spinster Biology teacher who had yelled at me for day-dreaming yet again (a thousand lives have been saved by me becoming a writer and not a surgeon) – but I doubt it.

After nearly four decades, I think it’s safe to say it was real.

This new year I’m shedding a lot of irrelevant ties and baggage. Need my hands free to catch more gifts from heaven.